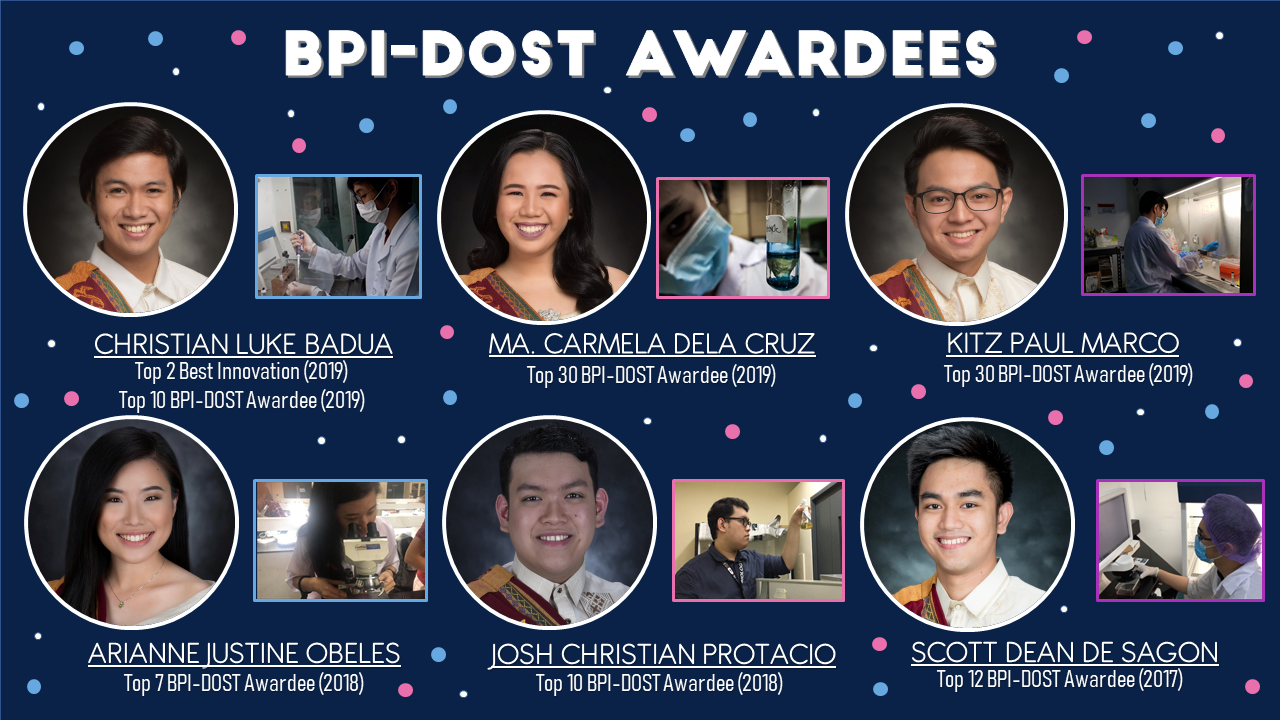 The BPI-DOST Science Awards was held last August 2, 2019 at the Alphaland Makati Place, Ayala Avenue Ext., Makati City, Philippines. The BPI-DOST Science Awards recognizes students from the field of science, engineering, and technology from the partner universities in the Philippines. This allowed students to address competitive issues in science, research, and technology, and to make an impact through the various innovations done for the betterment of the country.

Christian Luke Badua, a graduate of BS Biology won the Top 2 Best Innovation, was one of the Top 10 BPI-DOST Science Awardees, and one of the Top 30 BPI-DOST Awardees. His research was about the use of two local probiotic bacteria against colorectal cancer cells (HCT 116). It was concluded, based on the research, that the HCT 116 colorectal cancer cells underwent cell death, through apoptosis, upon exposure to the cell free supernatants from the probiotic bacteria. The study was tested by the use of MTT Assay and TUNEL staining. The research is a stepping stone to open avenues to raise awareness of adjunctive therapy against different types of cancer.

When asked what advice can he give to aspiring young researchers, this was what Luke Badua said “Never forget why you started doing this research. You will encounter challenges in the future, and you will indeed encounter failures, but always be reminded that you could always draw strength to the true Provider, God. Whenever you want to give up, look back and return to why you started. He placed that desire to pursue that topic that you have because He has a greater purpose for you as well as for those people who you’d help using the data that you’ll gather. You may be limited because you are human, but remember, our God is unlimited.”

Other BPI Awardees for this year were Ma. Carmela Dela Cruz and Kitz Paul Marco. The study of Ms. Dela Cruz was about the development of a system that can be used for the detection of aldehydes, a group of organic compounds that is used in the industry, in laboratories, and in the household. A sensor was developed that reacts with an aldehyde to give a color change that is easily seen by the naked eye, making it a portable and easy-to-use tool for aldehyde monitoring. The detection of toxic aldehyde fumes is necessary to reduce the health risks it poses to workers, students, teachers, and researcher. On the other hand, Mr. Marco’s research was about searching for potential anti-breast cancer agents through partial purification of compounds that inhibited breast cancer cell lines from the leaf extract of a native Philippine plant. Bioassay-guided fractionation was used wherein several purification steps are succeeded by determining the activity of the partially purified fractions. The most active fraction was then further purified and until the pure bioactive compound was obtained. The bioactive compound can be potentially used for the development of anti-breast cancer drugs.

For the past years, students from the university were also awarded in the BPI-DOST Science Awards. Last 2018, Arianne Justine Obeles and Josh Christian Protacio were the awardees and last 2017, Scott Dean De Sagon was one of the awardees. Ms. Obeles’ research was about the determination of the neuroactive effects of sea urchin coelomic fluid extracts on mice. Mr. Protacio’s work was about isolating and identifying plastic-degrading bacteria from a landfill. Lastly, Mr. De Sagon’s study was about determining which among the “Sampung Halamang Gamot” (10HG) endorsed by the Department of Health – Philippine Institute of Traditional and Alternative Health Care (DOH-PITAHC) exhibit cytotoxicity against lung carcinoma cell line (A549).

“Go and do the thing that you dream and love.”; “Hold on to your thirst for knowledge and know that our country needs you to help solve these problems.”; “You might think that you are wasting your time, but as long as you do what is needed, and is honest with yourself and your future audience, then you’re in the right path.”; “It is important not to accept and accept information but to question them, to challenge them.”; and “The single greatest thing about research is that one moment where it all comes together.” These were the inspiring words said by the awardees. They hope that we never stop asking questions and don’t give up easily. Rest if you must but don’t quit.