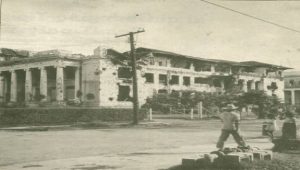 When the University of the Philippines transferred to Diliman, the U.P. Board of Regents approved a resolution creating a University Extension Division on June 21, 1951. The Division was to be located in the original Manila campus of the University, and had for its mission, to offer evening classes for working students. Courses offered included undergraduate subjects in in the general education program leading to an Associate in Arts or a Bachelor’s degree in Arts, Business Administration, Education and Law and three graduate programs: Master of Education, Master of Arts and Master in Industrial Management.

On November 22, 1966, the Board of Regents adopted a resolution specifying the Plan of Operations for the Extension Division which provided for the following: 1.) limitation of curricular offerings to undergraduate courses of the College of Arts and Sciences; and 2.) creation of an Academic Advisory Committee to oversee the program of courses with the Director of the Extension Division as chairman, and the Dean of the College of Arts and Sciences, U.P. Diliman and the Director for Undergraduate Studies as members. As a result of this resolution the supervision of some of the programs, specifically the graduate program in education and the undergraduate program in Business Administration were transferred to the mother colleges. The Extension Division was also renamed College of Arts and Sciences, Manila unit. At this point, the future of the Extension Unit became uncertain.

In 1969, with the assumption of Salvador Lopez as U.P. President, the atmosphere of uncertainty somehow changed. In 1970, the Manila unit was elevated to college status with “U.P. Extension in Manila” as its new name and designation of its head was changed from director to dean. Prof. David G. Wico, director from 1958 to 1969, assumed the title of dean in his last year of service at the University.

After Dr. Bonifacio S. Salamanca took over as dean, the college experienced vigorous growth. Expansion included the institution of new degree programs, such as B.S. Biological Sciences and the appointment of more full-time faculty members and administrative personnel. This led to the creation of three academic committees which later evolved into the Divisions of Humanities, Physical and Biological Sciences, and Social Sciences. 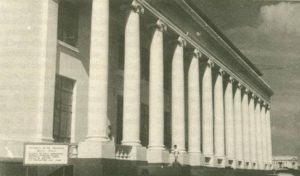 In 1973, the name of the college was further changed to U.P. College in Manila and instituted day classes at Rizal Hall. The college underwent an expansion of its core faculty members and administrative personnel. The expansion also led to the creation of three academic committees which later evolved into the Division of Humanities, Division of Physical and Biological Sciences, and the Division of Social Sciences. The B.S. Biological Sciences program was also instituted.

On March 19, 1975, U.P. President O.D. Corpuz issued Administrative Order No. 17, advising the college to re-examine its goals. Dr. Nestor N. Pilar was appointed dean in 1978. The college’s objectives of providing the liberal arts and basic science education in UP Manila were re-emphasized. A new degree program, A.B. Development Studies was also offered.

When Atty. Edgardo J. Angara assumed the U.P. presidency, he created two committees: one to re-examine curricular offerings (Committee to Review Academic Programs or CRAP) and the other, the Management Review Committee or MRC to re-examine the organizational structure and management of the University. It was the latter’s recommendation which was approved by the Board of Regents later embodied in Executive No. 4. This made possible the creation of the autonomous University of the Philippines in Manila on March 23, 1983, with the College of Arts and Sciences providing the general education curriculum for the health sciences program.

The B.S. Biochemistry and the B.S. Computer Science programs were instituted in 1996. In 2011, the B.S. Applied Physics was offered by the DPSM. The Master of Management (Public Management and Business Management) was implemented in 1999.

In line with UP’s thrust for a revitalized GE program, the CAS became the forerunner in the General Education Program, revitalizing existing courses and proposing new ones that aligned with the UP Manila’s role as the Health Sciences Center of the UP System.

The M.S. Health Informatics, a joint program with the College of Medicine was also offered in 2005.