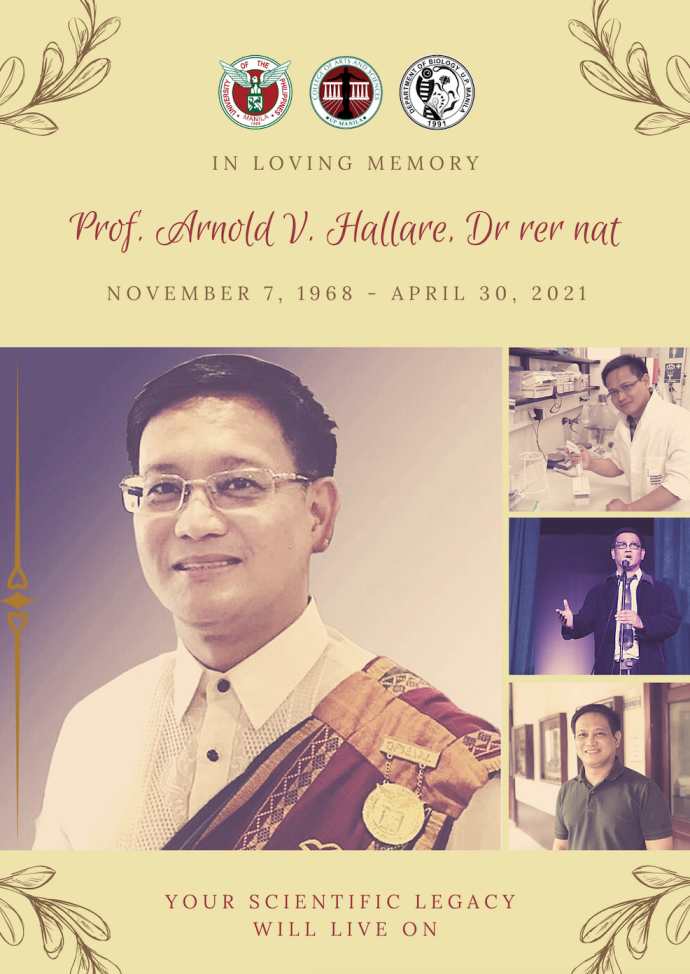 It is with unspeakable sorrow and heavy hearts that we share the news of the untimely passing of our revered colleague, Prof. Arnold V. Hallare.

Sir H to his general zoology, ecology, and animal histology students, and Doc Arnold to his colleagues, Prof. Hallare showed that with commitment to excellence and hard work, academic accomplishments know no age: he finished his MSc Biology in UP Diliman, Postgraduate Diploma in Ecology and Resource Management in Lincoln University in New Zealand, and PhD Biology at Eberhard-Karls University in Germany in a span of only over a decade. The succeeding years saw the growth of his prominence in global aquatic toxicology, when he produced well-cited international publications on biomarkers of environmental pollution; fish embryotoxicity; metagenomics of airborne dust samples; and ecotoxicology of e-fluids and biofuels.

Prof. Hallare was conferred several honors and served in various roles in his academic life. Among them are Outstanding Young Scientist of the National Academy of Science and Technology (2007), UP Centennial Faculty and UP Manila Outstanding Researcher (2008), Alexander van Humboldt Fellow (2008-2010), and Subject Editor of Soils and Sediments by Springer (2010). He was a long-time Director of the National Graduate Office for the Health Sciences and Editor-in-Chief of the Philippine Journal of Health Research and Development; University Scientist II; and Professor 12.

Prof. Hallare was one of the strong pillars of DB since its establishment as an independent department in 1991. He was instrumental in the development of our general zoology, ecology, and animal histology learning resources; fish developmental biology and ecotoxicology research; and the newly implemented Biomedical Environmental Track of the Biology program. The display of his musical prowess was most awaited in the annual Biogyugan, DB’s anniversary performing arts show; and his generosity with and love for food made the celebrations in the DB pantry most memorable. To say that he will be sorely missed by the faculty and by the many generations of bachelors, masters, and doctoral students that he mentored is an understatement.

Prof. Hallare is survived by his mother and siblings, and by Polo and Sheena. Dedications may be sent to Halvi Hallare Barros, his sister. His memory will remain in our hearts and his scientific legacy will live on. A virtual memorial service will be scheduled.